A brief history of the Codpiece 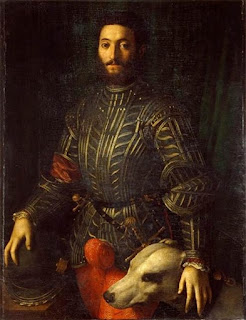 
The forerunner to modern boxers and briefs was the less than humble codpiece. That’s the sticky out bit at men’s nether region, as worn by Knights of Old and still to be seen in men’s ballet attire.


The practical problem which beset our forefathers was the ability to match upper body clothing with leg attire. Catering for the call of nature compounded matters so the upper crust simply flaunted their naughty bits as a fashion statement. Men wore short jackets whilst no one yet had worked out how to make a functional pair of trousers. Men wore tubular leg coverings obviously unable to cover the genitals which were often left exposed. By 1450, doublets had become immodestly short and the cod (slang for scrotum) piece, began as a flat piece of triangular material covering of the “rest and be thankfuls.” The cod piece was stitched at the three corners or at the bottom angle and tied at the top two angles, over the gap in the front of the hose. 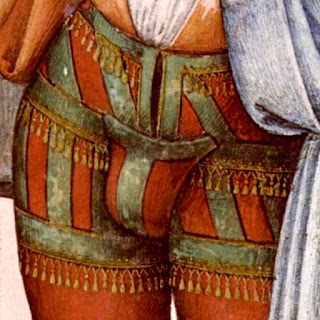 
After Edward IV (1442 – 1483) decreed men below the rank of Lord could not expose their genitals the flap (or cod piece) became obligatory. As time passed it bulged and distended when padding and stays came into vogue, the codpiece became the center piece of gentlemen’s attire. Fashion conscious courtiers had their codpiece had their ever extending jock box highly ornamented serving both as a boast and provocation as they swaggered about with what appeared to be a permanent erection. Cod pieces complemented poulaines sometimes worn with hawk bells to alert the hard of hearing, the lusty courtier was interested in sexual frollick. 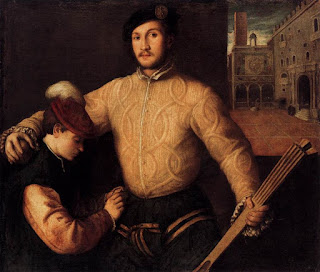 
The cod piece was even incorporated into suits of armour. The bulbous codpiece sometimes weighing more than two and a half pounds, both protected the wobbly bits from a glancing blow as well as demonstrate a rampant victor. 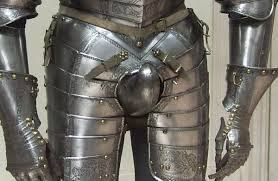 (Sexist Armor by MichaelPlatson via Imgur)

Sometimes the cod piece served as a ‘sex purse’ as men vied with each other in their genital display. The popular sex pocket came to be known by various other names. Latin scholars called them ‘barca’ or ‘breeches’, the French insisted they were brayette or graguette; and the English used the Old English word cod meaning “bag” or scrotum. The perfect gift for a lady of your desire was a hankerchief soaked in perspiration or other body fluids to exude Pheromones. This was a common behaviour and no better place to house them than in a codpiece. 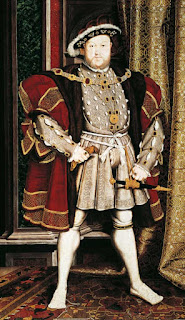 In the reign of Henry VIII (1491 – 1547) it was rumoured when a visiting royal was caught in rather a compromised position with his his dilemma clear for all to see including Queen Anne Boleyn. To pass it off with some decorum she tried to save his dignity by asking him if it was an apple he had in his pocket. Henry VIII was rather distressed and mistook the sticky out bit for a new fashion fad from Europe. He ordered his cod pieces to be suitably padded preferring the loaf shape to house his family jewels. 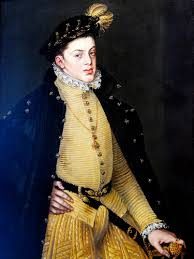 
Whether this is true or not, history records newer versions were developed as padding and embroidery became more ornate. According to fashion historian, Grace Vicary the cod piece during the Syphilis Epidemics was used to house a galaxy of herbs, minerals, syrups, and decoctions to protect those afflicted with syphilis. The other function was to prevent outer clothing from being stained by discharge from syphilitic sores. The fashion for wearing prominent cod pieces dwindled by the end of the 16th century, when social mores took a decidedly feminine direction with the rise of the Cult of the Virgin Mary.


The cod piece has enjoyed a limited return to fashion in the 20th century when some 60s rock bands and pop singers took briefly (no pun intended) to wearing them on stage. In the immensely popular novel Clockwork Orange by Anthony Burgess, the droogs wore cod pieces which was graphically shown in the 1972 movie. Later this inspired some pop stars including Michael Jackson to dawn a codpiece for theatrical effect. In the third millennium they have appeared sporadically on the fashion catwalk.

Interesting Sites
A brief history of the codpiece

Labels: A brief history of the Codpiece