An all too brief history of the phallic baton 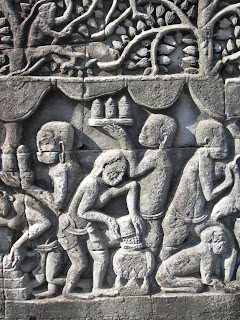 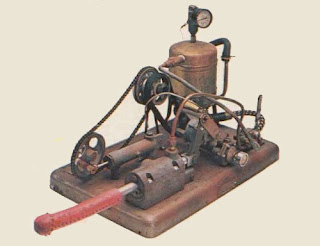 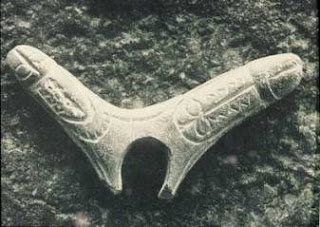 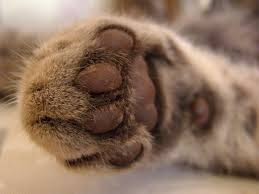 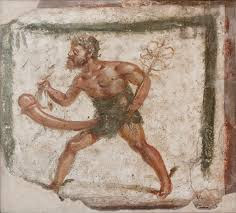 As Mediterranean civilisation changed to trade, female deities became less important as male dominated societies developed. Emphasis on the penis and its worship was evident in Egyptian artifacts depicting female dancers gyrating nearly naked, carrying a sculpture of an oversized erect penis to honour the god, Osiris. This male fascination filtered through the centuries until it reached its peak with the Roman God of fertility, Priapus. 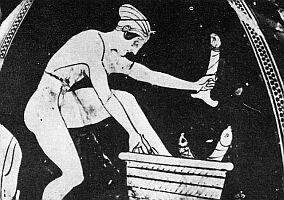 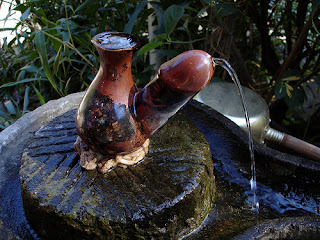 In Roman Times brides at their wedding would observe a custom known as Lactantius and Arnobius. This involved offer up her virginity to Priapus (Roman God of fertility), by placing her sexual parts against the end of a dildo, sometimes this involved introducing the phallus and tearing the hymen. The ceremony was thought to conciliate the favour of the god, and to avert sterility. Similar customs were still found in other parts of the world from India to Japan and the islands of the Pacific. According to some experts therapeutic clitoral stimulation was undertaken from the first century A.D. and physicians would manually massaged women to orgasm, in the anticipation of purging them of mysterious illness. Galen, a well-respected Roman physician, described massaging a woman’s genitals until "she emitted turbid and abundant sperm" and was "free of all the evil she felt". 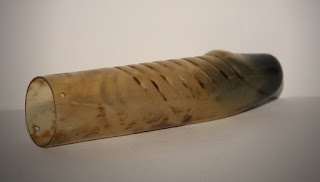 Cylindrical devices fitted over the erect penis to make them look larger, were first mentioned in the Kama Sutra and were crafted from wood, leather, buffalo horn, copper, silver, ivory or gold. In Europe eighth century nuns were known to use artificial phalli. At first this was part of religious custom (probably pagan) but once it lost its religious significance clitoral stimulation degenerated into a mere indulgence of passion. 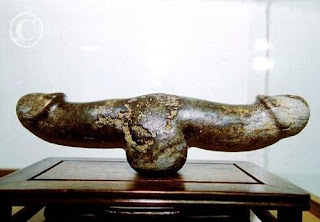 In the 16th century, St Foutin was worshiped throughout France. When in 1585, Protestant armies sacked the French town of Embrun they found the statue of Saint Foutin with its phallus head stained red from wine. St. Foutin was the first bishop of Lyons, and was attributed the distinguishing attributes of Priapus given to him by his parishioners. His statue had a large phallus of wood, which was an object of reverence to barren women. The faithful either took shavings of the wooden phallus and made an infusion for their husbands to drink, or poured wine over the phallus and kept the run off in containers until it soured i.e. sainte vinaigre. Documentary evidence is scant what the women employed it for. 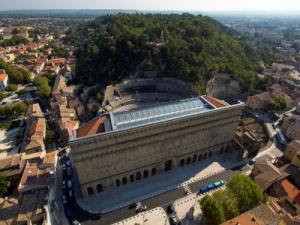 A much larger phallus of wood, covered with leather, was an object of worship in the church of St. Eutropius at Orange. Other phallic saints were worshipped under the names of St. Guerlichon, or Greluchon, at Bourg-Dieu in the diocese of Bourges, of St. Gilles in the Cotentin in Brittany, of St. Rene in Anjou, of St. Regnaud in Burgundy, of St. Arnaud, and above all of St. Guignolé near Brest and at the village of La Chatelette in Berri. Many of these were still in existence and their worship in full practice in the last century; in some of them, the wooden phallus is described as being much worn down by the continual process of scraping, while in others the loss sustained by scraping was always restored by a miracle. The reason was less Godly that believers thought because priests continued to secretly hammer out the wooden extension. 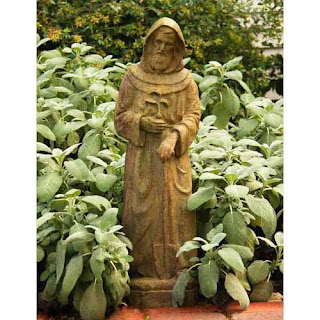 In the case of some of the priapic saints mentioned above, women sought a remedy for barrenness by kissing the end of the phallus; sometimes they appeared to have placed a part of their body naked against the image of the saint, or to have sat upon it. This latter trait was perhaps too bold an adoption of the indecencies of pagan worship to last long, or to be practiced openly; but it appears to have been more innocently represented by lying upon the body of the saint, or sitting upon a stone, understood to represent him without the presence of the energetic member. In a corner in the church of the village of St. Fiacre, near Mouceaux in France, there is a stone called the chair of St. Fiacre, which confers fecundity upon women who sit upon it; but it is necessary that nothing should intervene between their bare skin and the stone. In the church of Orcival in Auvergne, there was a pillar which barren women kissed for the same purpose, and which had perhaps replaced some less equivocal object. Many traditions were known and a common custom for girls on the point of marriage was to offer their last maiden robe to that saint. This superstition prevailed to such an extent that it became proverbial. A story is told of a young bride who, on the wedding night, sought to deceive her husband on the question of her previous chastity, although, as the writer expressed it, "she had long ago deposited the robe of her virginity on the altar of St. Foutin." 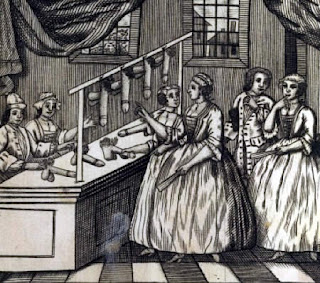 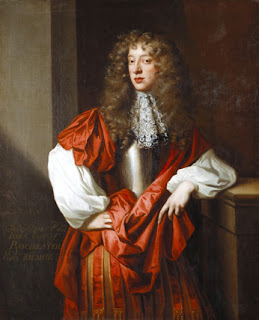 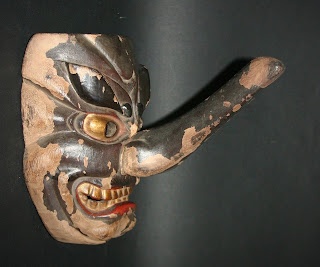 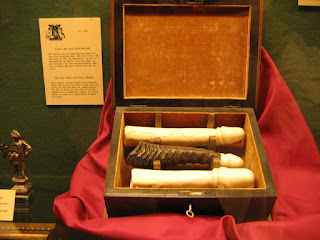 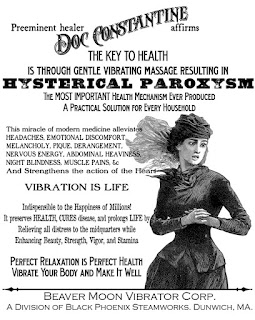 Hysteria was the second most diagnosed disease behind fever and generated a market, for new medical instruments. It was reported “pelvic massage treatments” comprised more than half of medics’ business. Medical treatment involved massage of the vulva with fragrant oils. Whilst Victorian Society frowned upon masturbation, "paroxysm" (orgasm), through clitoral stimulation did not involve penetration. Therefore was not considered androcentric ‘sex’ and provided it was conducted by a medically trained professional there was no stigma attached. This was imminently more palatable then being committed to a mental institution and or have a clitorotomy. Both barbaric actions were commonly undertaken at the time. At first medical vibrators did not look phallic and were instead heavy pieces of equipment weighing in at between 5 - 15lb' depending on the size of their engine. 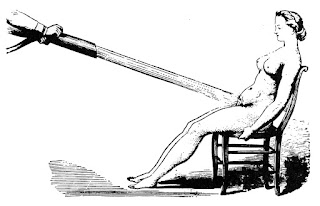 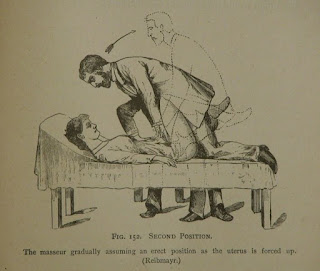 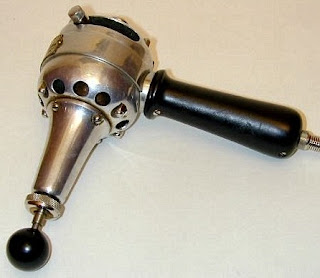 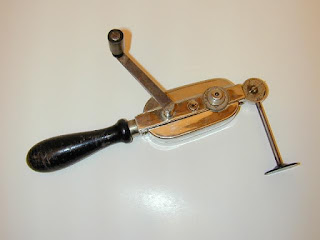 The first advertisement for a home electric vibrator, the Vibratile, appeared in the US magazine ‘McClure’. It was portrayed as therapeutic agent suitable to cure headaches, wrinkles, and neuralgia. Soon they were openly sold to the public as self-treatment for hysteria. Vibrators were advertised as body massagers, recommended for all body parts but discretely omitting the erogenous zones. Not to offend public morality advertising copy was written in coy and oblique language but the point was not missed with double-entendres like, “all the pleasure of youth ... will throb within you" or "tingle with the joy of living." "Delicious, thrilling, health-restoring sensation called vibration" or for the more pragmatic consumer, “perfect for those hard-to-reach places." As electricity became widely available, plug-in home vibrators were one of the first electrified home appliances. These adverts appeared in many popular women’s magazines, including Needlecraft, Home Needlework Journal and Woman's Home Companion. The 1918 Sears Roebuck catalogue sold one vibrator as a "very satisfactory...aid every woman appreciates." In male magazines young men were urged to buy the devices for their wives as Christmas gifts to keep them "young and pretty" and free from the scourge of hysteria (Heart Magazine, 1921). Mail order was a standard method of marketing vibrators up until 1920. 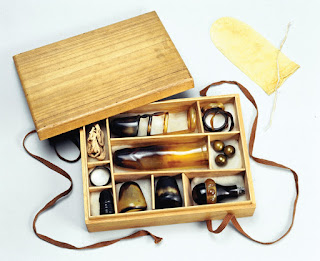 This increased their popularity in post war USA and when vibrating, rubber battons were enhanced with steel spring spines for stiffness this enabled better twist, thrust, and rotation. By 1949, a sex manual entitled ‘The enjoyment of love in marriage’, actively promoted the use of vibrators. Four years later hysteria, the female disorder, was no longer officially recognised and removed as a disease classification from the American Psychiatric Association. 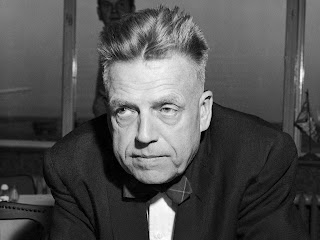 In the 1950's, vibrators were advertised as massagers, zit removers and effective weight loss appliances but Kinsey’s research had indicated the locus for female stimulation was the clitoris, and not the vagina. The use of vibrators for recreation first featured in sex manuals in 1959 and 1960, and by the time, Masters and Johnson, well known sex therapists published their researches into sexuality in the late 60s, the use of vibrators was well established. 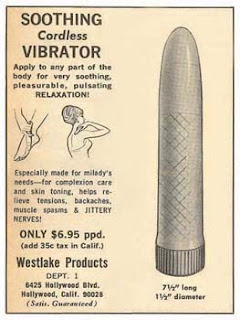 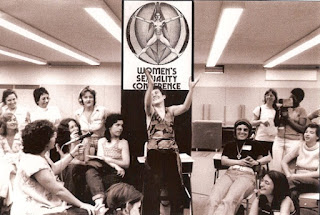 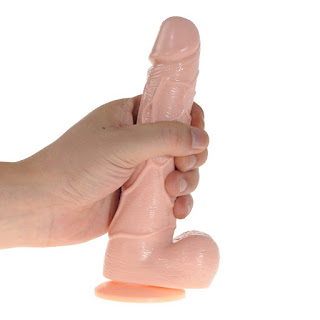 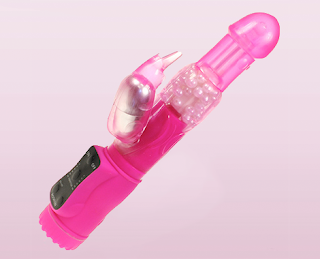 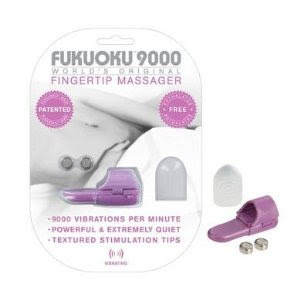 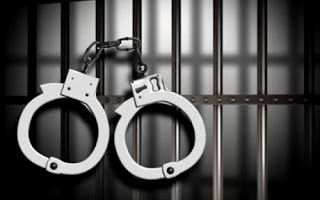 In 1998, the US state of Alabama passed a law, banning vibrators. It was deemed obscene to sell or manufacture a sexual device which was considered to be “harmful”. The penalities were harsh with 1 year hard labour or a $10,000 fine if found guilty. The law was similar to those in 5 other states, including Texas and Georgia. Outraged, six women and their Civil Liberties Lawyers took their case to court, saying the law invaded their privacy. They also pointed out that Viagra, a device which could be purchased to obtain an orgasm, was on sale in that state. A year later, a judge struck down the law, saying it denied therapy for people with sexual dysfunction, although he refused to guarantee the right to privacy when it came to sex toys. The law still stands in the other states.

Labels: An all too brief history of the phallic baton

##NAME##, I think I love you. Well, I know that I'm in love with your blog. Just 30 minutes ago, I was searching for ##LINK## websites and I'm blessed to run into your blog from surfing. Great Information!

Thank You ##NAME##. Finding quality information on ##LINK## doesn't come easy. Even though ##TITLE## wasn't actually what I was looking for, I have got to bookmark your blog. Your information and personality is priceless!

This is a neat blog with lots of interesting stuff in it.