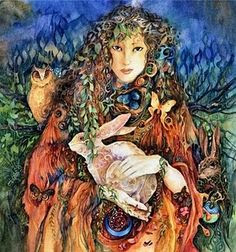 Easter takes its name from Eostre the Anglo-Saxon goddess of dawn. This is the reason we, in the Northern Hemisphere, associate Easter with east or sunrise. Easter was the celebration of Spring and the beginning of the growing season. Followers of Eostre sacrificed oxen in her honour and baked buns with horns decorating the top. Small loaves on leavened bread scored with a cross were also found in ancient Egyptian tombs. The cross appears to have had no symbolic significance, or at least if it did, it has been lost in time. 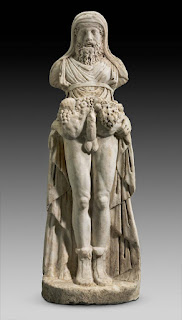 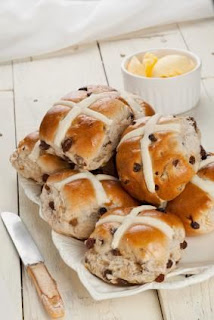 In France people continued to eat phallic shaped bread and cakes called ‘fateaux’ and according to the 19th century French historian, Jacques Antoine Dulaure, these were still being baked for Easter in the town of Saintonge. 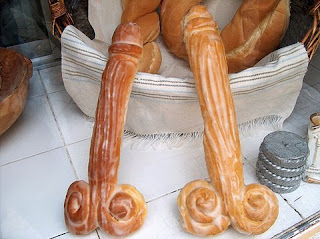 Fateaux was also carried in the procession of the The Feast of Corpus Christi at St. Jean d'Angely, France. 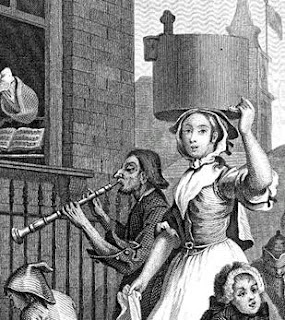 No one can be sure of the origin of the word bun but many believe it comes from the Old French word bugne, meaning, and “a swelling caused by a blow” The same origins for the word bunion. The word bun did make its appearance in the English language about 1370. The hot cross buns were understood to make its first appearance in the 18th century (Poor Robin’s Almanac for 1733). The first recorded mention was a street cry common to bakers.

One a penny, two a penny would imply there were two types of bun on sale. 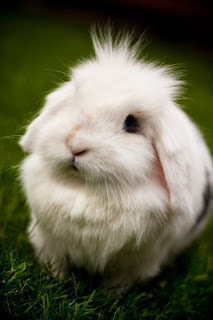 To Pagans rabbits and hares symbolized life and fertility because there was a plentiful source of food. During the spring months both became a focal reminder of procreation. By the 1600s the rabbit had become more associated with Easter festivities and was a custom known and practiced in Germany. Until the 18th century the term ‘cony’ (pronounced cunny) was used to describe adult rabbits, and rabbit was the preferred name for young rabbits. “Cunny” was also a commonly used Old English term for female genitalia and so cunny had to become bunny. 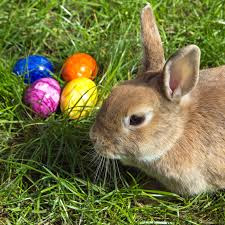 The origins of Easter eggs come from the custom of the German settlers to Pennsylvania during the 1700s. The children believed if they were good then the Osterhase (pronounced in the dialect of the region Oschter Haws) (Easter Bunny) would lay a nest of coloured eggs for them. There does not appear to be any attempt to infer the rabbits laid the eggs but the symbolic combination of eggs for fertility; and rabbits for procreation was enough. In legend, the Easter Bunny brought baskets full of coloured eggs to the homes of good children on the night before Easter. The Easter Bunny would either put the baskets in a designated place or hide them somewhere in the house for the children to find when they woke up in the morning. A visit from the Easter Bunny or was the equivelent to the arrival of Christkindl (Kris Kindle) on Christmas Eve. In rural areas children built nests for the magical bird often using their hats or bonnets (as in Easter Bonnet). Parents fearing the loss of expensive clothing sought out the nests and instead played out the process in reverse by hiding the eggs so their children could take pleasure in finding them. The nests became Easter Baskets as the custom spread throughout the 18th century. All of course was credited to the mythical Easter Bunny. Many of the old myths were described in the writings of 19th century fairy tales which became very popular.

The first edible Easter Bunnies were made in Germany during the early 1800s and were made of pastry and sugar. No one can be sure why the eggs had to be coloured but certain colours such as red and green were symbolic of life and growth respectively. Eggs were not eaten during Lent (the fast kept by devotees prior to Easter) so it may be eating brightly coloured eggs may have had some celebratory significance to Catholics. It has also been suggested indulging in egg eating throughout Lent may have been a Protestant preoccupation. 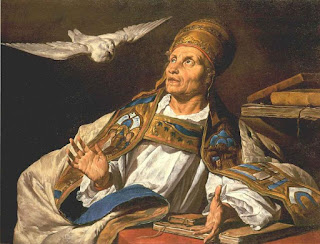 Pope Gregory the Great (540 – 604) ordered his missionaries to use old religious sites and festivals and absorb them into Christian rituals where possible. According to Grimm and his followers, the Christian celebration of the Resurrection of Christ was ideally suited to be merged with the Pagan feast of Ēostre and many of the traditions were adopted into the Christian festivities. The egg was a symbol of the rebirth of the earth in Pagan celebrations of spring and the early Christians adopted it as a symbol of the rebirth of man at Easter. Rolling the egg may also be symbolic of the rolling away of the rock from Jesus Christ’s tomb before his resurrection.

In many European countries, children traditionally rolled eggs down hillsides at Easter ("pace-egging"). The eggs were traditionally wrapped in onion skins and boiled to give them a mottled gold appearance (today they are painted) and the children competed to see who could roll their egg the furthest. There is an old Lancashire legend that says the broken eggshells should be carefully crushed afterwards or they will be stolen and used as boats by witches. 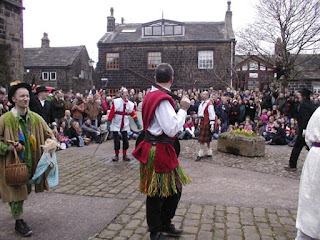 The eggs were eaten on Easter Sunday or given out to pace-eggers. Pace-eggers were fantastically dressed characters who processed through the streets singing traditional pace-egging songs and collecting money as a tribute before performing traditional mumming plays. Many of these traditions were taken to the New World by European settlers. 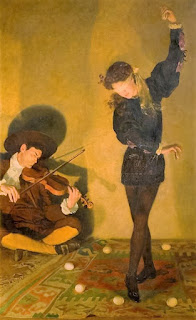 One other popular egg game or egg dance or hop dates from the 5th century. A hundred eggs laid on the ground or floor covered with sand and the goal was to dance among them damaging as few as possible. Young couples, holding hands began the dance and if they finished without breaking an egg they were betrothed, and not even an obdurate parent could oppose the marriage. The hornpipe was one of dances performed as an egg dance. Sometimes it was danced blindfolded.

Another variation of egg dancing was to roll an egg out of a bowl while keeping within a circle drawn by chalk and then flip the bowl to cover the egg. This had to be done with the feet without touching the other objects placed on the floor.