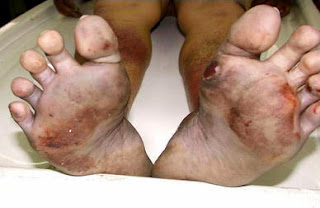 Among the many immigrants to Australia each year there are a small band of people who have suffered intolerable humiliation at the hands of tyranny. Many have experienced torture and debilitating victimisation. A common form of torment involves the feet. Falanga, or bastinado, has its origins in the Middle East. Victims are bound with their feet elevated and torturers beat the soles with cables or metal implements. Blows may be direct to bare feet or through shoes. In severe cases, casualties are then forced to walk on glass; or may be ordered to jump, on the spot, carrying a heavy weight. The immediate effects are pain, of course, with bleeding and tissue swelling. Permanent damaged seems to be dependent on post traumatic oedema (or swelling). Torturers may limit this, as part of the ordeal, by cooling the feet or forcing the victim to put their shoes on after a beating. Smashing the heel and ball of the foot results in destruction of the natural fatty-fibro padding which assists shock absorption in normal walking. Skin wounds heal by second intention, leaving painful scars. Detachment of the skin at its deeper levels may also result in damage to proprioception leading to aponeuritis. The whole sole of the foot becomes painful. Changes in pressure within muscle compartments often requires the person to change their style of walking. The feet are reported as hot and cold and there is an increase in the rate of perspiration. Stability and balance may also be adversely affected due to falanga. In many regions of the world falanga is still practiced as a form of corporal punishment in bringing up children. A preferred punishment mooted out by many Irish terrorists was knee capping, i.e. shooting the victim through the knee. Because this was so commonplace, Belfast orthopaedic surgeons perfected new reconstructive techniques and combined with rehabilitation improved the victims chances of walking without a limp. Agents of terror soon changed their modis operandi and shot their victims through the foot instead. 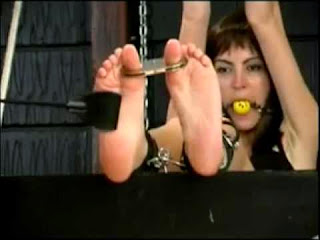 Bastinado is a form of torture, which consists of beating the soles of the feet with a thin rod. At first the pain is not marked; but as feet swell the pain becomes unbearable. Subsequent inflammatory response may be severe enough to cause ishaemia with resultant amputation. The purpose was not to cause amputation but the pain helped interrogation. The victim was beaten until collapse; the person is then revived and the torture continues. Other tyranny included eyebrow plucking and pulling out beard hair by hair, Finger nails and toenails were also common as well as other demonic skin damage. A common torture meted out to Christians was to nail them through the hands or feet in Crucifixion style. 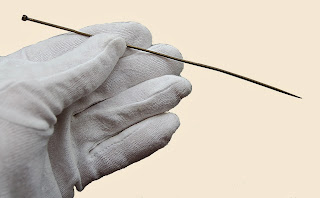 The mark of a witch was keenly sought after as proof and could be found anywhere on the body. Prickers were skilled witch hunters who inspected the accused bodies carefully from head to the soles. When they came across blemishes they would prick them with special brass pins. If no pain was elicited this confirmed the person was a witch. Once this happened the a confession was required. Witches in Edinburgh were hung by the thumbs with lighted candles placed beneath the soles of their feet to gain a confession. 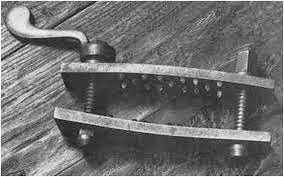 Caspie-claws were iron frames to hold the leg the frame was heated over a brazier.