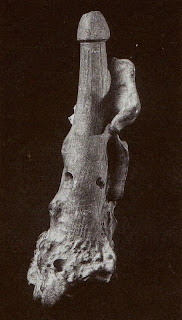 Until modern times the roads in Japan were little more than footpaths, and travelers went in fear of what might befall them. From the 10th century lucky talisman were used as milestones and came in all sorts, mostly god like figures but by far the most popular were phallic shaped milestones. 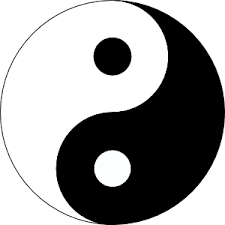 The power of the stone was to remind the fearful traveler of the pleasures behind or ahead. Proper behaviour was required in the presence of deities, of course, but the jolly wanderer is left to take consolation and peace, leaving them less exposed to the dangers of the road. The earliest stone milestones were of an erect penis but these were later replaced with copulating couples. These images provoked the powerful complementary forces of yin and yang. The milestones through the ages took on powerful properties among the peasant folks and were soon afforded magical status with powers to make baron women fertile. In gratitude, grateful families left offerings of an appropriate shape. Oddly shaped carrots and mountain potatoes were especially popular. When Buddhism arrived there was a concerted effort to tidy up the countryside and so sadly few phallic milestones remain. 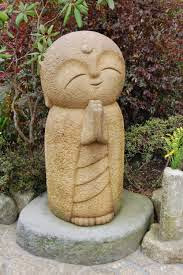 The Japanese did keep the images but these were transferred into bald headed statues. Jizo was the most common. The remaining examples of the stones were removed by the 19th century Victorians, concerned at the apparent affront, never realising, of course, Jizo was the god of lost children’s souls.