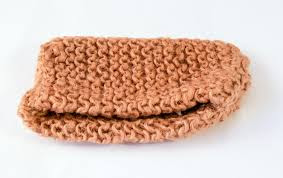 ‘Rovies’ or 'huggers', were worn by the workers in the Dundee (Scotland) jute mills up until the 20th century. They were hand crocheted, ankle high boots made from loosely twisted jute yarn. Popular with spinners they were worn with thick woolen stockings. Not only did this keep the worker’s feet warm, it could get pretty cold in a jute mill, especially in winter, but also kept the micro-fibres from the loom which filled the air from getting onto the feet and especially in-between the toes, of the spinners where they would cause intolerable irritations. 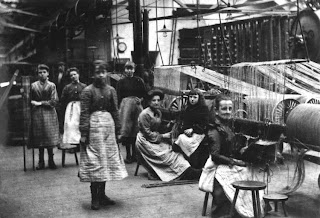 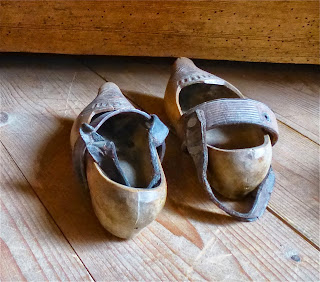 In the old satanic mills of Victorian times, most workers went barefoot or wore wooden clogs. There were various styles of clog but a common one worn by the proletariat in France just after the Revolution were Sabots ("walk noisily"). 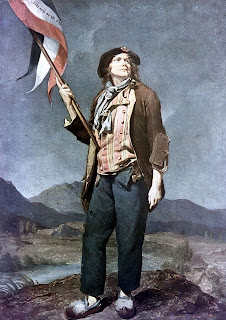 The 'citoyens sans-culottes.' movement (without breeches), immediately after the Revolution, stood for social equality, economic equality, and popular democracy. They supported the abolition of all the authority and privileges of the monarchy, nobility, and Roman Catholic clergy, the establishment of fixed wages, the implementation of price controls to ensure affordable food and other essentials, and vigilance against counter-revolutionaries. Sabots were regarded as symbols of ‘Liberté, égalité, fraternité.’ Unfortunately, these were quickly rejected as the Empire style emerged, leaving only the very poor to carry on wearing them. 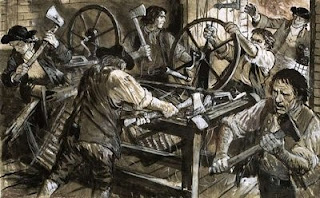 However the poor workers voted with their feet, well shoes , and when industrialization came to Europe. Disgruntled workers faced with the intrusion of technology on many traditional crafts, decided to destroy the machines by throwing their clogs (sabots) into the machinery. They literally sabotaged it, or so the story goes. This is a rather romantic notion and many believe the noise made by sabot-wearing labourers, interrupting production during frequent labor disputes was more likely to be the source. Mill owners were keen to not encourage this and were delighted to employ barefoot workers taking no responsibility for the consequences. The workers were left to overcome these challenges by inventing new occupational footwear.

And the rest, as they say, is history.