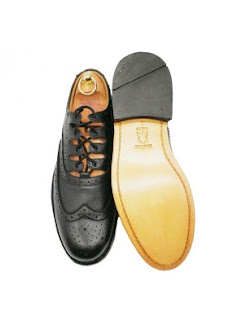 Golf shoes evolved from Ghillie style shoes worn by landed gentry and used to cross wet fen lands. Water was able to run through the holes in the uppers and eventually traditionally brogue patterns were adapted and incorporated into Oxfords. An early reference to spikes on golf shoes comes from a Scottish golfer’s manual dated 1857.

‘Let the novice invest in a pair of stout shoes (boots constrain the ankles too much), roughed with small nails or sprigs, and he will march comfortably and safely over the most slippery ground that can be turned out by the meridian sun in the dog days.’Source: Janet Seagle, USGA Librarian and Curator of the Golf Museum, in Far Hills, New Jersey. 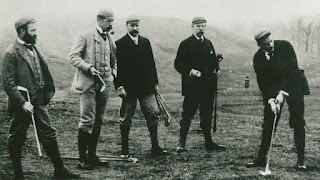 According to Gibeault, Younger and Bengeyfield (1983) hobnail shoes were worn in New Zealand where at the First Interprovincial Contest between Otago Golf Club, Dunedin, and a Christchurch team held in 1893 some players were photographed wearing hobnail shoes. 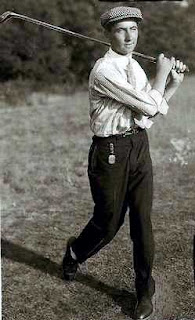 Walter Hagen wore hob nail shoes in the 1914 US Open. Previously it is recorded in his biography he wore red, rubber soled shoes but after playing at The Country Club, in Brookline, Mass., he changed his footwear because he was constantly slipping on the wet surfaces. Two years later Bob Jones wore the same style of shoe at Merion in the 1916 Amateur and by 1919 spike shoes had become standard foot gear. 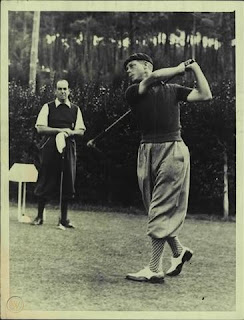 By the thirties fashionable Oxford brogues were worn in two tone leathers and called Spectators. These stout shoes had wing-tips and spikes which were used for better grip. 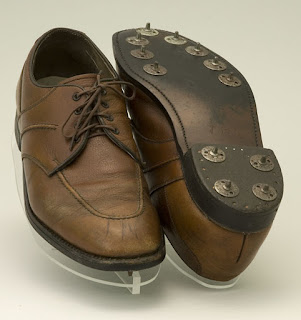 The average golf shoe had 12 spikes; i.e., 24 spikes per golfer and green keepers became concerned at the damage the new shoes made to the grass plant and soil. Modified shoe spikes were developed with the shoulder either flush with the sole or recessed within the sole. These were thought to cause less damage to the soils and turf. Rising concerns were such however, several independent studies were conducted to ascertain the potential damage spiked shoes made. The first started in 1958-59 to determine the effect on wear and putting qualities of putting green turf by different shoes. The conventional metal spike shoe, the "ripple sole" shoe, and a modified golf shoe spike (with recessed or flattened spike shoulder), were tested. Eventually ripple sole shoes were banned by some clubs because of the distortion they caused to the putting surface. 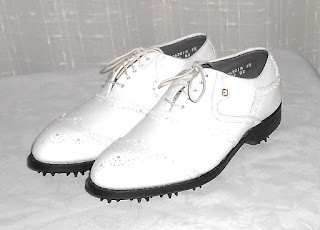 By 1982 the design of golf shoes had changed to include multi-stud sole shoes made from either rubber or a composition material. These did less damage to greens whilst providing the golfer in moderate climate conditions better traction. Initially welcomed by the golfing community it became apparent in a very short time the new shoes continued to damage greens and putting surfaces, especially in wet conditions. 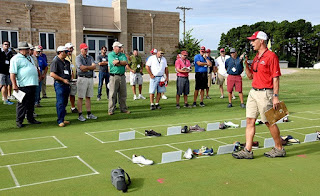 Back to the drawing board and in 1983 the University of California, Riverside, started a study to evaluate the effect on turf grass quality and injury to putting green turf caused by four different golf shoe designs i.e. a conventional metal spike golf shoe, a multi-stud sole golf shoes, a "spikeless" golf shoe with very small suction-type cleats, and an alternative multi-stud sole shoes design. The shoes were tested in different weather conditions over a period of three weeks and this was followed by a subjective assessment of the putting qualities of each plot used in the previous tests. The overall results confirmed metal spikes caused most damage to turf. Studded shoes (average 108 per shoe) caused less grass damage than spikes but still pieced the plant tissue. Further in wet conditions studded shoes had a marked tendency to ruffle or disrupt the smooth putting surfaces causing a waffle-like imprint. Suction cleat style shoes (approximately 750 small rubber cleats) caused least damage to the turf and putting surface. 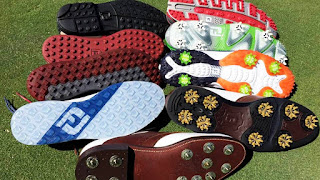 As in football codes, there was a been a lobby to encourage golfers to use two pairs of shoes i.e. a spikeless shoe for normal weather conditions and a spiked shoe for wet surfaces Since the original results of the study were published more rubber-soled studded athletic shoes have become available but the old spike shoes remains popular among golfers. Despite the evidence to support the lasting damage caused by spiked golf shoes indications are the PGA Tour does not permit any of its players to wear the rubber studded shoes during their events.


Golf shoes are a critical part of the sport and the need for a good fitting shoe to support the feet during walking on undulating surfaces is axiomatic. However as important is a shoe which supports the feet during swing. Golf involves long stretches of walking normally with short spells of dual stance to hit the golf ball. Footwear needs to function both as dynamic walking shoes (on average an 18 hole game can equate to a 4-5 mile cross country workout) as well as give rigid support to the feet when delivering the club to the ball (swing).


During set-up for swing, the golfer’s mass (weight) should be evenly distributed on both feet with more weight on the forefoot as the golfer leans over resting more weight on the insides of both feet. Proper foot alignment on the backswing gives greater control of the downswing and contact position. During the backswing, weight is shifted to the back foot and evenly distributed or maintained slightly on the inside. To avoid ‘sway” (and improper contact with the ball), it is important not to shift body weight at this time to the outside of the foot. The back foot is held in a solid position on the back swing without rolling to the outside, the front foot meantime is in turn rolling to the inside. The front heel occasionally comes off the ground to promote a full shoulder turn. Completion of the backswing places the weight on the back foot, evenly distributed between forefoot and rear foot, with the weight left on the front foot rolling to the inside. Downswing involves a rapid shift of weight from back to front foot; momentum brings the heel of the front foot down, and follow-though naturally causes a rolling of the back foot to the inside and the front foot to the outside.


Golf should always be played from the insides of the feet. Golf swing is a highly co-ordinated activity which involves the multi-articular skeleton and is determined by good foot action. Timing distance and direction are all dependent upon the comfortable transference of weightbearing from one foot to another during swing. Shoes need to be soft and flexible for walking and rigid stable supports for swing. Designers of traditional golfing shoes have attempted to cater for both functions and often failing to provide ideal footwear for the game. Some golfers change their footwear or re-adjust the shoe fit to accommodate walking and swing. 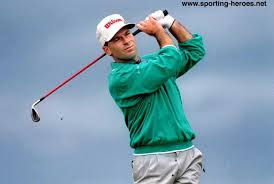 In the recent past, attempts have been made to introduce electronic golf shoes. However, these new shoes need to meet the stringent rules of the United States Golf Association (USGA) which govern fair play. Stored energy shoes(i.e. spring shoes) have already been banned after John Houston, PGA tour professional wore Weight-Right golf shoes at the 1990 Augusta Masters' Tournament. The United States Golf Association (USGA) prohibited the shoes from future competitions because they were deemed to improve the golfer's swing to such a degree it gave an unfair advantage over other golfers. 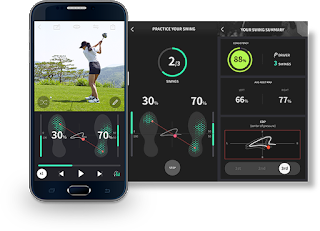 Varies attempts have been made to introduce golf shoes which contain piezoelectric sensors, a controller, and active-response elements designed to modify the shoes’ fit to suit conditions. Pressure under the ball of the user's foot was measured by sensors placed over the fourth and fifth metatarsals. Pressure (kPa) and time (seconds) thresholds were set for swing and walking. This information was passed to the controller monitor which conveyed the information to active-response elements in the sole; the tounge; laces; and the shoe’s upper. These triggers adjusted shoe characteristics best suited to the golfer. To date, these new generation golf shoes have had no more than novelty value.


There are already golf shoes on the market which have lacing adjustment mechanisms activated by either a heel switch which is actioned by the golfer clicking their heels, or alternatively by manual means.