The Curse of Myrtilus and the ancient games 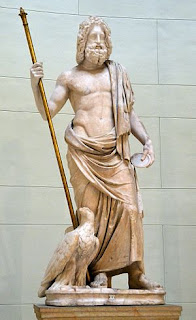 The first organised games took place in Greece in 776 BC. The ancient games were part of a religious festival honouring Zeus and were the scene of great political rivalries. They were also the sites of many controversies, boasts, public announcements and humiliation. Held every four years for nearly 1,100 years they began in 776 BC and ended in 393 AD. 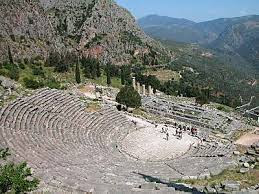 The Isthmian Games were held in Cornith in honour of Poseidon where pine branches were given to the champions. The most famous were the Olympics held at Olympia in honour of Zeus. Olympic champions were given olive leaves to commemorate their victories. The games alternated so there was an athletic festival every year. Ancient Greeks kept calendars by "Olympiads" or four-year spans to correspond with the games. The ancient games took place at the first moon after the summer solstice (Guhl & Koner, 1994), and victors became heroes. Winners were presented with an amphora (two handed vessel) full of the finest olive oil. The vessels were decorated with scenes of the particular event. 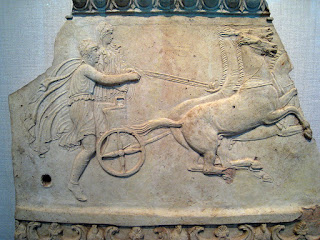 Originally the athletes were amateurs but eventually they received prize money and even appearance money. The Olympics were the one exception. The origins of the games remain shrouded in mystery but some historians believe it may have been to celebrate a foot race organised by the guardians of the infant Zeus. Others think the ancient games arose as a celebration of Pelops defeat over King Oenomaus in a chariot race. The prize was the hand of Princess Hippodamia. However not entirely out of character, Pelops cheated in the chariot race which resulted in the death of Myrtilus the charioteer. With his dying breath Myrtilus cursed Pelops and many believe the curse of Pelops is the main reason for the many misfortunes which are associated with both the ancient and modern games. 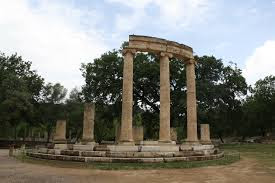 The ancient games were a celebration of the gods they were held in one of the oldest religious centres in ancient Greece, Olympia. This was at the site of a great temple. The settling was practical in that it was a venue with easy access. Travelers from distant parts of Greece traveled to compete in the games. An international truce among the Greeks was established for the month before and after the games to allow the athletes and judges to reach Olympia safely. Judges had the power to fine and or disqualify entire cities for breaking the truce. The games grow in popularity and competitors came from far and wide. At first, non-Greeks could not compete but Greeks came from as far as Spain and the Ukraine. 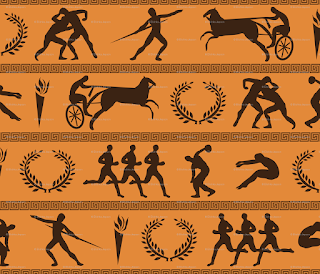 After the 2nd century AD, the Roman Empire brought more competitors to the games. Greeks boys were trained for the competition from early in their schooling. Like today's serious athletes their sport required mental dedication, top conditioning, and outstanding athletic ability in order to make the grade. The Greeks believed rigorous training should not commence until after three years of study and the child had reached puberty. Athletes had to take an oath they had trained for 10 months prior to competition. 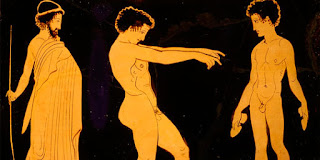 Competitors were naked which remains a mystery but two plausible theories include competitors may have tripped over their long shorts and died during competition and the other was to ensure no women could compete. Married women were forbidden to travel to the Olympic Games and only men and unmarried girls were allowed to attend. Women began to complete around AD 200. The only sporting event was a short race. Cornith had a thriving sex industry and it is likely the athletic games provided an ideal opportunity for men to indulge in extramarital sex. (Rancier L, 1997). 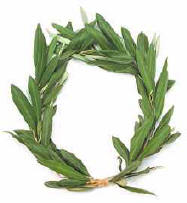 The first games were staged near a big olive tree dedicated to the father of the gods and men. From it, athletes received their glorious prize - a garland of olive leaves said to give magical properties to the victors of the station, or stadium. The first Olympian was a cook Koroibos from Elis, the home of Zeus's sanctuary and the ancient games. Records and timing did not exist nor did gold, silver and bronze medals. Only the winner mattered in the ancient games and stood to gain considerably from their efforts. In Athens once a winner was declared champion they received free meat for life. Cities lured successful athletes to live within their boundaries so they could represent their interests on the competition. Some athletes were known to receive appearance money. Men dominated and women were not allowed to compete or watch the events. Married women had their own sports festival and these were dedicated to goddesses Hera and Demeter protector of agriculture and fertility. Olympians were gods and had fans as well as statues and songs and poetry written in their honour. 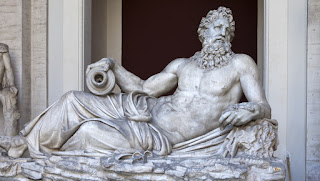 Scandals were as frequent then as they are today and the first briber scandal was in 388 BC. A boxer bribed two opponents to throw their fights and was caught, fined and banned from the competition. Athlete who transgressed during the ancient games was publicly whipped by the adjudicators. Judges themselves were held accountable for their behaviour and as early as 396 BC two were fined for showing favouritism. Under the Roman emperors, the games deteriorated into professional carnivals and circuses. Emperor Theodosius eventually banned them in 394 A.D.

Labels: History of the Ancient Olympics, The Curse of Myrtilus