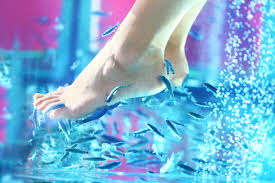 Fish pedicure originated in Turkey. and involves dipping the feet into a special bath which contains up to 200 tiny toothless fish which then proceed to nibble away old skin cells leaving the new skin refreshed and invigorated. Fish pedicures are popular and have spread to most other countries.

Human skin is made up of tiny cells, which are divided into two major layers. The lower Dermis contains all the blood vessels, nerves and fat lies below than the outer skin or epidermis which is an avascular (bloodless) layer. 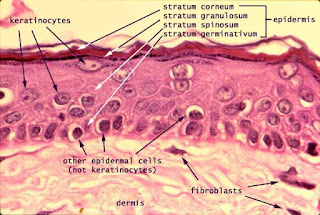 The epidermis is very thin but made up of five distinct levels. As the lower cells pass upwards to the surface they become more compressed until they are cell-less flakes of keratin (protein). In order for the older keratin flakes to separate, squames (individual flakes) need a high water content which is the function of moisturising creams i.e. to add this water to the cells. In the normal course of events old squames leave the skin to be replaced by new ones so in effect like other animals we shed our skin every 28 days. 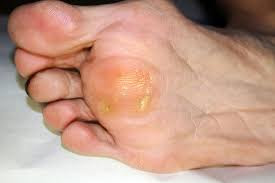 When the epidermis is damaged it may start to over produce keratin and this is seen either as callus or corns. Callus is a general distribution of hard skin (usually painless) whereas corns are more concentrated and can be painful. Biochemical factors in the blood determine the growth rate of the epidermal cells (which vary with individuals) and so damaged cells reproduce like normal cells but at a faster rate. This explains why callus and corns return when paired and the only way to deal with the concentrated mass of keratin (hyperkeratosis) is to physically scrape it away. Something we have known since the time of the Ancient Greeks when the original surgical scalpel was first invented to remove hard skin. 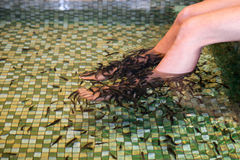 The key to any successful treatment is the safe removal of the keratin flakes and fish that nibble away skin cells, whilst novel, can be a valid way to control mild hyperkeratosis. Its usefulness is usually restricted to callus care and hence epi-dermabrasion by fish appears more in the range of beauty therapy than medical treatment but nibbling fish have been successfully used in the care of psoriatic skins (affects about 2-3% of the World Population). The two species of fish used are Garra Rufa and Cyprinion macrostomus, colloquially known as doctor fish and belong to the carp and minnow family. The fish have no teeth so cannot nibble (more importantly break into the dermis) but have a strong suck. Attracted to the many nutrients within the skin cells including those produced in healing wounds they swarm the skin plaque and proceed to lick it once it has been softened by the water. The constant ‘sucking’ by the younger fish has a gentle massaging effect on the recipient giving them a gently tingling sensation . Once the old cells are removed this gives the clinician better access to underlying lesions which then may be treated in a conventional way.


At first, the introduction of fish pedicure to mainstream beauty therapy caused no major alarm to authorities mainly due to the inability of the fish to damage healthy skin and no cases of cross infection reported were reported. More recently however, health authorities have been concerned at the potential to spread infections between people through open wounds. In the UK the Health Protection Agency (HPA) started to look more closely at the new phenomenon and already some US states have banned them. HPA published a report Guidance on the management of the public health risks from fish pedicures (2011). They report echoed the the potential for cross infection and the need for consumers to bare this in mind when having a fish pedicure. Salons are recommended to use UV-lit tanks which are constantly filtered to keep them clear of disease. However not all salons are registered and policing standards presents a major challenge.