Sandals from the Cradle of Civilisation

The beginning of footwear as we know it today, starts with civilization and sedentation. Many anthropologists believe the cradle of civilization lay in the Ancient Near East in a region roughly corresponding to modern Middle East, i.e. Iraq and northeastern Syria. The convergence of two major rivers i.e. the Tigris and Euphrates produced rich fertile soil with copious supply of water for irrigation. As a result many non-nomadic agrarian societies formed and the subsequent interaction between them laid the beginning of civilisation. The ancient civilisations of Mesopotamia formed in the 4th millennium BCE and ended during 2nd century BCE. The time period corresponded to the Bronze Age (3300-1200 BCE) and the Iron Age (1300–600 BCE) in that region. 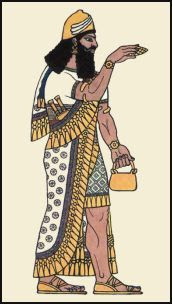 Sumer (or Sumeria) was one of the first major civilisations and arose in the 4th millennium BCE. It lasted for about a thousand years during which time the Akkadians migrated into Mesopotamia. By the beginning of the Akkadian Empire in the 23 century BCE most of the customs and clothing of Sumer were subsumed into the Akkadian civilisation. Other kingdoms followed including: Babylonia (Elam, Assyria and Suria) (1700 – 1250 BCE); Assyria (20th century – 627 BCE); Medes ( 640 –549 BCE) and Persia (The Achaemenid Empire 550–330 BCE). 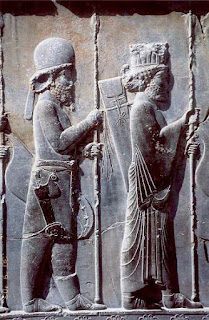 In the 18th BCE the Hittites established a kingdom which lasted until 1180 BCE before it disintegrated into several independent "Neo-Hittite" city-states. The Phoenician civilization (1200 – 539 BCE) was a maritime trading culture that spread across the Mediterranean. Throughout the ancient Mesopotainan civilisations a Sumero-Akkadian culture prevailed. As civilisations came and went each expanded their parameters through trade. Eventually links with other early civilisations including Ancient Egypt (3200 BCE – 343 BCE), India (2800 BCE - 1500 BCE) and China were forged causing major cultural cross-fertilisation. 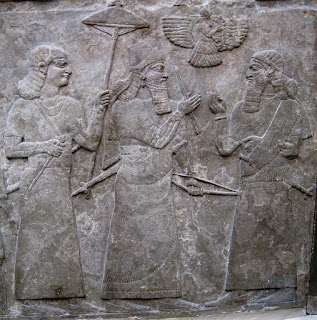 The Sumerian civilisation were noted for its workmanship and people clad themself in skins and hides. Sumerians were thought to generally go barefoot but excavations have unearthed a royal shoe with a turned up toe (circa 3000 BCE). Later footwear was worn at formal ceremonies by high dignitaries and Sumerian shoe styles become widespread. Up-turned shoes were made from dyed leather and had a heel or elevated soles. Early shoes included sandals with toe loops and heel protection. Sometimes straps came over the instep and footwear of the affluent was invariably bejellewed. The Babylonians were skilled tanners and worked with kid and goat skins. They frequently dyed the leathers brilliant colours and the process became known as ‘morocco.’ These skills were later taken to Spain with the Moors and centred in Cordova. By the Middle Ages these became known as "Babylonian Shoes." 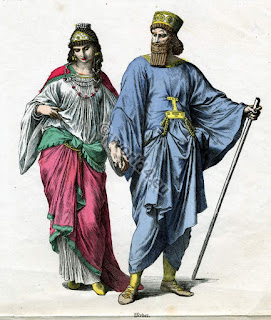 The Babylonians perfumed leather and included embroidery work on expensive shoes. Babylonian kings wore slippers made from fine leather with bands of white, gold, and red. The Sumerian word ‘mulu’ is the origin of word mule and Babylonian women wore mules and slippers or bilgha (babouche) made in white leather and fastened with jewels. Sandals were commonly worn by men and women and many Babylonians wore turned up shoes with pom poms. Servants in Babylonia went barefoot. 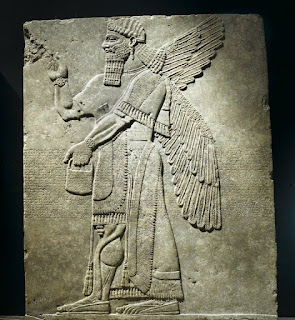 Assyrians wore sandals, low shoes and boots. The Assyrian kings wore thick soled leather sandals with an ornamented heel piece decorated with pearls and gems. These sloped towards the arch of the foot from the back of the ankle. Thongs were wrapped around the big toe with two on either side which finished over the instep. Alternatively the regent wore sandals with an extra thong round the big toe. Royal shoes were embroidered with gold thread. Shoes were made from fabric or soft leather and women wore flat leather slippers. Highly colourful footwear often striped or variegated were popular. Red and yellow usually indicated high ranking officials. Delicate colours such as pale blue was especially popular among the affluent. Assyrian warriors wore buskins laced from top to instep and decorated according to rank. Bowmen had leather boots with tongues running from to the lower part of the calf to the top of the boot for protection. These fastened in the front with thongs. Some soldiers preferred bronze or brass greaves (to protect the shin) and wore them with sandals. 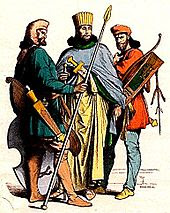 Medes and Persians shoes and boots were also made from soft leather . Boots were worn at various heights and shoes (‘perisque’) enveloped the foot and fastened in the front with buttons or a buckle. Persians shoes tied below the ankle bones or had three button fastenings over the insteps. White leather shoes with matching thong leather were tied at the front. Persians fastened low open-toed shoes with triple laces. By the 3rd century BCE purple boots with fine embroidered motifs outlined in gold were popular. Elevated shoes with cork heels were also worn by the Persians. The ancients protected delicate footwear with wooden over sandals.

Labels: History of shoes, Sandals from the Cradle of Civilisation