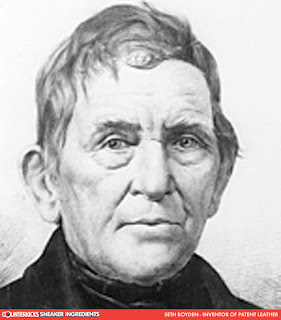 Patent leather describes the gloss finish on the leather and was developed in 1818. The leather protection ensured dressier looking footwear which could easily be kept clean with a cloth. It was invented in Newark, New Jersey by Seth Boyden and involved coating the leather with linseed oil. By the nineteenth century, leather shoes and boots had become more affordable to the masses and to ensure the leather looked its best shoe polish became an essential accessory. 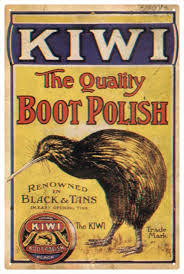 The world’s best known shoe polish (Kiwi) was first made in Melbourne Australia in 1906. The polish was developed by William Ramsay (Scotsman) who named it Kiwi after the flightless bird endemic to New Zealand. This was the home land of his wife, Annie Elizabeth Meek Ramsay. Kiwi shoe polish was a fine blend of quality waxes which protected and nourished leather as well as giving the shoes a longer lasting glossy shine. Initially it was sold to local farmers but eventually caught on in the towns and cities. Shoe polish gave both a shoe shine as well as preserving shoe leather. Later in 1908 the product incorporated agents that added suppleness and water resistance to the leather. 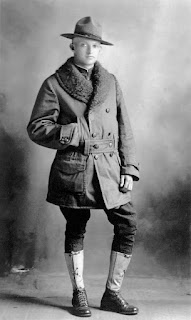 At the outbreak of World War I (1914) a gigantic demand for army boots followed and these needed to be polished easily, quickly, and efficiently. Sales in boot polish rocketed and very quickly Kiwi shoe polish became the Commonwealth troops’ favorite. Kiwi Polish was also adopted by the Americans as Australian-made boot polish was then considered the world's best. Doughboys took the marvelous boot polish back to the states where it became popular it soon started to be manufactured in the States. By the mid twenties Kiwi polish was sold in over 50 countries and had became a must accessory for the prevalent English style which prevailed at the time. 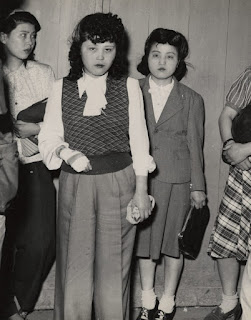 Even after hostilities in the Second World War the benefits of well polished boots swung advantage in the minds of Japanese “Pom Pom Girls” (teenage prostitutes) who during the Allied occupation of the country preferred boys with a shine on their boots. Despite their designer uniforms US rank and file were not dab hands with the shoe brush but once they realized there was a superior Australian boot polish, the commodity became a prize black market item. US soldiers returning from the war continued to use the product, leading to a further surge in its popularity. Kiwi shoe polish stayed Australian based for nearly 70 years. Today KIWI shoe polish is sold and marketed in almost 200 countries around the world. 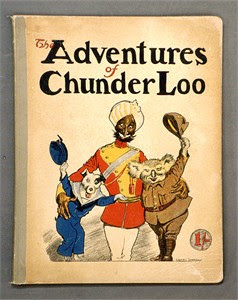 The market for shoe polish was fiercely competitive in Australia with many rival brands. Most used fictional figures or historical characters to advertise their products. Cobra Boot Polish was made in Sydney and advertised in The Sydney Bulletin (1909 -1920). The cartoon character used was "Chunder Loo of Akim Foo." (Chunder Loo was rhyming slang for and spew or sick). Drawn by Norman Lindsay (later by his brother Lionel Lindsay) the adverts usually had a short poem which dealt with topical issues. As a result the adverts were very popular ensuring the Australian colloquialism “chunder” became common vernacular. Much later the term became forever associated with Barry Humphries’ Australian abroad, character, Barry McKenzie.


In 1906 Cherry Blossom Boot Polish was launched in 1906. It sold well and the ‘fish plate’ metal opener was introduced in 1924. This design paved the way for the ‘press to open’ tin we still use today. 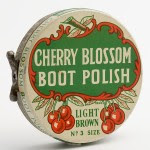