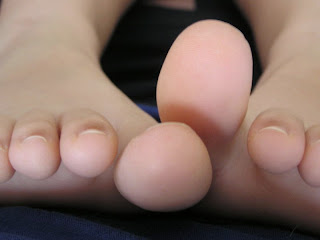 Feet are funny things. Stuck away and forgotten about unless they give us pain or it is time for some naughty foot frolics such as a date on St Valentine’s Day. According to the University of Manchester study some years ago we use feet as a means of non-verbal communication and the secret language of feet can reveal a great deal about our personality. Researchers discovered the way we move our feet reveals much about our feelings both consciously and subconsciously. At a social gathering women will move their feet towards men if they find him attractive. An unnatural amount of foot movement signals dishonesty in both sexes and men tend to move their feet more, when nervous. Unlike facial expressions or hand gestures people are usually unaware when their feet are moving and apparently most of us are oblivious to the messages our feet send out. 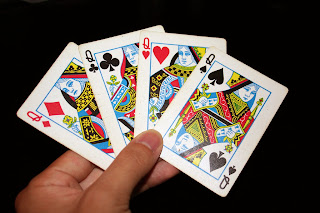 A few years ago the University of Virginia undertook some interesting research when they paired 48 subjects into male and female couples. The volunteers were unknown to each other and everyone was shown how to play a game of cards before being divided into three groups. Group one could talk to each other but were not allowed to have any physical contact. The couples in the second group could communicate non-verbally by secretly playing footsie under the table but were not able to speak to each other. The last group could communicate by touching feet openly. The groups were then asked to play cards and during this time were observed. The results supported those who talked and touched feet openly were much less attracted to each other than those instructed to play secret footsie. Apparently the attraction related to the risk of detection which heightened participant’s erotic feelings for each other. Secrecy releases phenylethylamine (PEA) which is the same chemical released during the early stages of infatuation. PEA also keeps us up all night and suppresses our appetites. PEA raises blood pressure, increases heart rate and `is evidenced in thrill seekers. The same buzz comes from chocolate but care is required not to consume as too much of the stuff otherwise the opposite effect occurs.

I expect everyone is familiar with the act of flirting or sharing a surreptitious intimacy called footsie or footsie - footsie. This kind of intimate touching of the feet or leg under the table has been known since the Middle Ages but perhaps never better described better than in Dianne Brill’s book Boobs, ‘Boobs, boys and high heels.’ According to the fashion doyenne, there are six ways you can enjoy close encounters of the footsie kind. Apparently there are several moves involved starting with the toe nudge followed by delicate investigation up under the trouser hem. The less direct method is to rest your foot against your partner but alternate between removing the pressure and pushing again. This needs to be done in a spontaneous manner so the recipient is unsure if the contact is intentional or otherwise. Leg crossing and toying with the shoe are other forms of footsie but a high degree of dexterity is required in this matter, if you are going to be successful. So practice is essential. 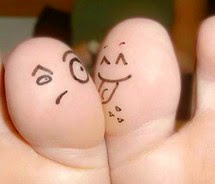 The origin of the gentle art of foot seduction is unknown although unsolicited foot attention is well documented in many cultures. The ancients for example had a preoccupation with feet as ‘object sensual’ with many Roman generals taking their lover’s sandal as keepsakes into battle. Why feet and shoes should be thought sexy in this way is complex but likely to involve a phenomenon known as the Displacement Theory. Simply put this describes what took place after we started to cover up our wobbly bits. Unable to see genitalia because it was covered meant greater significance was placed on clothing as an indication of gender. As part of this process hair and hats; feet and shoes became sexualized. In ancient society the sight of clothes provided the safest distance to judge friend or foe. Clothing served three main functions: decoration, modesty and protection. The word shoe (scoe) is Anglo-Saxon, meaning 'to cover furtively,’ and shoes have a long history of being used as sex toys for safe sex. 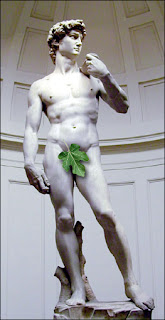 In antiquity clothing provided decoration and modesty. Fig leaf mentality from the 3rd century onward may explain why we covered up, but by far the major reason for clothing, was decoration. The essential purpose of decoration is to beautify bodily appearance in order to attract admiring glances. This became a preoccupation of the ruling class and was fiercely imitated by the rising middle class. Only when decoration and modesty are pitted together however, do we witness a modern psychological conflict or clothing neurosis. The degree of harmony or compromise between these conflicting interests is clearly seen in shoes. This is where many believe shoes and or feet have much to say about personality. In psycho-social terms there are three types of female shoes. Revealing shoes display feet as objects of frailty. Concealing shoes transmit a suggestive erotic message of tight containment. Both strongly proclaim femininity, individuality and sexual allure. Finally masking shoes play down personality by discouraging notice. 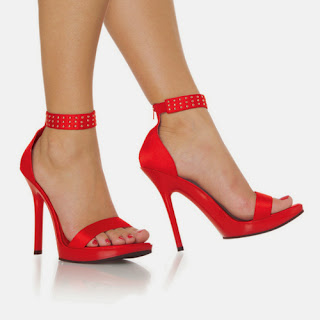 Ladies, according to people who know these things wearing red shoes guarantees you will have a good day. Dressed in high-heeled red pumps gives a spring to your step, and puts a smile on the face of anybody who happens to catch a glimpse of your lipstick-colored footwear. For Valentine’s Day the message is clear – for him buy her a pair of red shoes, and for her get out the red Bobby Dazzlers.

Back in European history to the middle ages when a nameless cobbler crafted a pair of poulaines (long toed shoes) for courtier Rulk Fulkner. Rulk was a dandy and fop and dedicated setter of fashion. Like Posh Spice he suffered painful bunions and had very broad feet. His cobbler crafted the new look long toed shoe broad enough at the bunion area but ending the shoe well beyond the end of the toes and meeting at a point. The fashion caught on and lasted unabated for at least three hundred years. Extensions became longer and longer (24” longer than the foot) until they were so long as to make walking almost impossible. Young bucks started to stuff wool and moss in the extensions to keep them erect. Indeed, the blatant phallic symbol became so long, often they had to be attached to the knee with a chain to prevent tripping. A popular vulgarity was to paint the extensions flesh coloured, allowing them to flap with lifelike mobility. Small bells (hawk bells) were often attached to the end of the poulaine to indicate the wearer was a willing partner in sexual frolic. 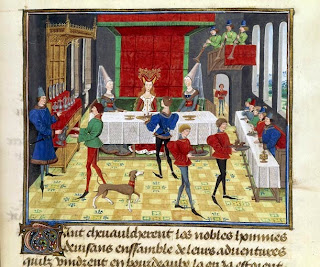 Footsie-footsie took on a more meaningful importance during this time and many a dinner party would be enhanced with below table shenanigans. This allowed a man to keep three women perfectly happy under the table whilst leaving his hands free to enjoy a healthy repast. Shocked at the overt obscenity of long toed shoes, the Church tried to condemn them and when this met with dumb silence Papal Bulls were issued to prevent commoners from wearing peaked toed shoes.

Footnote
So what do the professional people think you should do this Valentine’s Day? 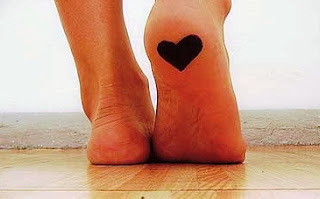 The American Board of Multiple Specialties in Podiatry (ABMSP) are keen to remind all of the benefits to body and soul that come with a simple foot massage. Just the job for this forthcoming St Valentine’s Day. According to the expert’s foot massage, whether administered by a professional masseuse or a loved one, can bring substantial health benefits as well as pure comfort and relaxation. Other benefits include :

Eased pain and soreness. Foot massage can reduce the discomforts of a day's work and can even accelerate recovery from recovering foot injuries and mild ailments.

Stress reduction. Gentle massage soothes muscles and in turn calms the nervous system, resulting in a more relaxed state of mind and a more attuned and satisfied consciousness. 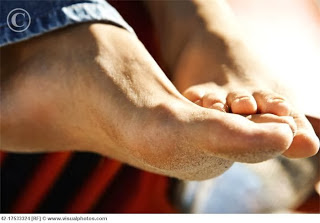 In the past the UK Society of Chiropodists and Podiatrists, took the unprecedented step of commissioning a Gallup Poll on what people would like to do with their feet on Valentine's Day. Not surprisingly top of the poll for men and women was to tickle the feet of their favourite celebrities. 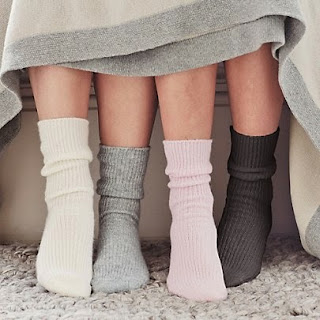 Flowers, chocolates and candlelight are more associated with St Valentine's Day than the well being and appearance of your feet, but this year you might like to give some thought to them. Clearly there are more romantic things than discolored toenails or skin that feels like sandpaper and according to experts, ugly feet sap self confidence. People who lack self-confidence, do not project sex appeal or so we are told. Partners can be understood when they draw the line and insist socks must be worn at all times. Nothing more unromantic into bed than your partner with their socks on , or so you might think. A study undertaken in Canada has revealed sock wearers are more likely to enjoy better sex, so there is hope for us all. Keeping the feet warm may enhance perfectly the function of the brain which controls relaxation and climax. So this Valentine's Day maybe the perfect time to take stock of feet and foot attire and an ideal gift for a loved one is to book them in for a pedicure, with a nail trim, skin scrape and massage. Complemented, of course with a nice pair of shoes and that way, you can keep your socks on.