The Blue Shoe Project: The story of the blues 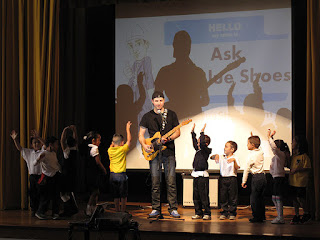 The Blue Shoe Project is a non profit record label based in Dallas, Texas. The sole purpose (excuse the pun) is to promote the works of blues performers to school children and is the brain child of Jeff and Michael Dyson. Jeff Dyson is a huge fan of the blues and became concerned that many of the great legends were of an age where they would no longer be around and how important it was to encourage young people to become more aware of the oral history of ‘blues.’ The Dyson’s produced a concert in Dallas featuring Pinetop Perkins, Henry James ‘Mule” Townsend, David "Honeyboy" Edwards and Robert Lockwood Jr.

This was a concert with a difference and after the performances the musicians took questions from the audience and told the stories behind their songs. Admission was restricted to local college students, who were required to write an essay on the history of the blues to gain admission. The event was filmed for posterity and the Shoe Project was set up as a non-profit organisation. To raise capital copies of the Last of the Great Mississippi Delta Bluesmen: Live in Dallas" concert cd were sold on line. The album went on to win a 2007 Grammy Award for best traditional blues album.


Father and son Dyson have other projects in the pipeline including another DVD and CD of concerts. More importantly they have started two educational programs that travel around schools in Texas teaching children about the history and relevance of the blues. The program is also used to promote awareness of not pirating music. In a generation which takes free downloading as a right the organisers feel it is important to ensure artists should be compensated for their work.

Here is some Pinetop Perkins with Down in Mississippi

Labels: The Blue Shoe Project: The story of the blues