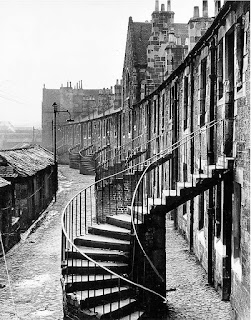 Recently a colleague commented on a couple of pictures I posted of city landscapes from the early 20th century. 'No litter' he said, and that got me thinking. Litter became a national problem in the mid-1950's as the Western World recovered from the Second World War and the domestic manufacturing industries began to prosper. Improved mass production of disposable goods produced a growing mountain of waste as mass consumerism was encouraged . 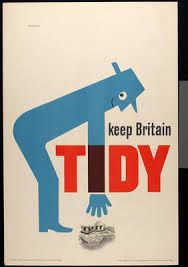 The first great UK clean-up took place in 1951 for The Festival of Britain, and again in 1953 for The Queen's Coronation. ‘Keep Britain Tidy’ was originally set up by a conference of 26 organisations in 1955. The conference was initiated by the British Women's Institute after a resolution was passed at its 1954 AGM to start a national anti-litter campaign. 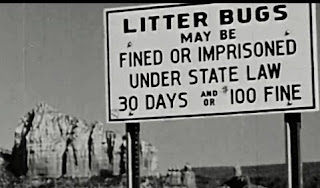 Keep America Beautiful was formed in 1953 when a group of corporate and civic leaders met in New York City to bring the public and private sectors together to develop and promote a national cleanliness ethic. In 1956, the first Public Service Announcement (PSA) on Littering appeared in the US. The first Litter Act in the UK came in 1958 after a public outcry.


Throughout the Sixties, societal attitude toward litter underwent a huge change and public service anti-litering campaigns like Keep America Beautiful and new state laws about littering were evidenced. These were mirrored throughout the Western World yet by the 70s, 'littering' had become a widely accepted universal social norm. The average person holds a piece of litter for 12 steps before dropping it. So if they don't find a litter bin within about thirty feet, chances are it lands on the street. Large areas of plastic waste collected in the ocean despite a ban on dumping by the International Maritime Organization. The packaging industry is the single biggest market for new plastic and over the past decade demand for plastic has grown by over 30% to 300 million tonnes per year. Plastic waste remains the 21st century's biggest environmental pollutant.


As part of the Queen's 90th birthday celebrations, the Keep Britain Tidy Group organised ‘Clean for the Queen,’ a great national litter pick. Despite a mixed reaction, over quarter of a million people collected 300,000 bags of rubbish, enough litter to stretch from Land's End to John O'Groats.


On average in England, 30 million tonnes of rubbish are swept up annually at a cost of nearly £850 million. This would be enough rubbish to fill Wembley Stadium four times over. The UK’s top litter items in 2016 were all products designed to be single use and disposable: cigarette stubs, sweet wrappers, drinks bottles, food packaging, paper tissues and plastic bags.


Carbon Footnote
Plastic takes around approximately 400 years to decay into fine plastic dust which will eventually drift around our planet. There is now estimated to be five trillion pieces of plastic floating in the oceans.