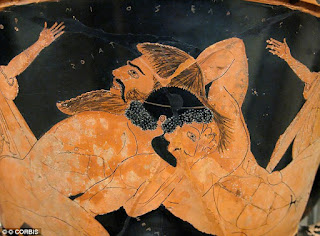 Wrestling can be traced back 15,000 years, when athletes participated naked with their skins coated in layers of olive oil for protection from sunlight and cold weather. They wore no shoes. Babylonian and Egyptian reliefs show wrestlers using most of the holds known in the present-day sport. Over the centuries a wide range of styles and rules developed, but it took until the 19th century when Greco-Roman wrestling and contemporary freestyle wrestling were regulated into formal competitions, in part as a result in the rise of gymnasiums and athletic clubs.

The origins of boxing date back to Egypt around 3000 BC and became part of the ancient Olympic Games in the 7th century BC. Soft leather bands (thongs) were used to bind boxers’ hands and forearms for protection. The Romans later replaced these with caestus (Latin meaning "to strike"), to protect the forearm when guarding heavy blows. Eventually the glove was studded with metal, and Cestus-fighters, mostly slaves, fought to the death until it was abolished in 393 AD due to excessive brutality. 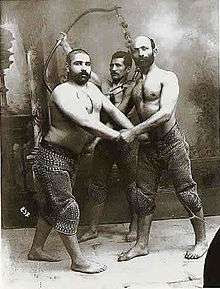 Professional wrestling began in France circa 1830, with professional troupes travelling the country showing off their talent. Wrestlers challenged members of the public to knock them down for a cash prize. This kind of wrestling was often associated with such unsavoury practices as drinking and gambling and the rules changed from venue to venue, with fights frequently fixed to attract larger audiences. French showman , Jean Exbroyat developed ‘flat hand wrestling,' and formed the first modern wrestlers’ circus troupe in 1848. 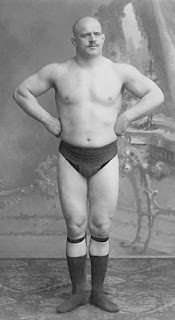 This new style soon spread to the rest of Europe, the Austro-Hungarian Empire, Italy, Denmark and Russia under the names of Greco-Roman wrestling, Classic wrestling or French wrestling. By the end of the century, “Greco-Roman” wrestling style had become the most fashionable sport in Europe, and in 1898 the Frenchman Paul Pons, “the Colossus” became the first Professional World Champion. 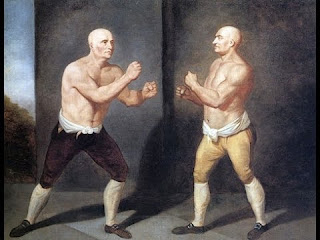 After the Fall of the Roman Empire combat sports was almost lost and whilst retained for military training was almost forgotten. By the 17th century in England bare knuckle fighting (or prize fighting) was common. The first English bare-knuckle champion was James Figg in 1719. Early boxing had no written rules and contests were extremely chaotic with headbutting, punching, eye-gouging, chokes, and hard throws, all part of competition. Many deaths resulted. In 1743, Jack Broughton introduced some rules to protect fighters in the ring and if a man went down and could not continue after a count of 30 seconds, the fight was over. Hitting a downed fighter and grasping below the waist were prohibited. Contestants used wrist wraps to protect their hands, and most punches were directed straight to the head. In 1838, The London Prize Ring rules, superseded those drawn up by Jack Broughton and governed bareknuckle boxing. Under the London rules, bouts were held in a 24-ft (7.3-m) square “ring” enclosed by ropes. A knockdown ended the round, followed by a 30-second rest and an additional 8 seconds to regain the centre of the ring. Butting, gouging, hitting below the waist, and kicking were banned. The last heavyweight championship bout held under London rules was in 1889 when John L. Sullivan beat Jake Kilrain in 75 rounds to defend his heavyweight championship. 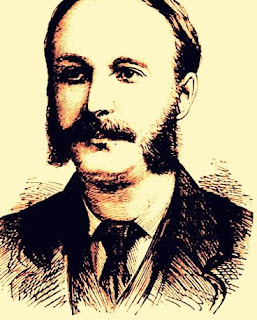 Welshman, John Graham Chambers (1843 – 1883) was one of the most influential and significant figures in the field of late Victorian sporting and social life. He rowed for Cambridge, founded inter-varsity sports, became English Champion walker, and coached four winning Boat-Race crews. In 1866, Chambers founder the Amateur Athletics Club (later known as the Amateur Athletics Association) and was a catalyst in the founding of British amateur athletics. In 1867, he codified the rules for modern boxing that emphasized boxing technique and skill. Chambers sought the patronage of John Sholto Douglas , the 9th marquess of Queensberry, who lent his name to the new guidelines. The "Marquess of Queensberry rules" differed from the London rules (bare knuckle fighting) in four major respects: contestants wore padded gloves; a round consisted of three minutes of fighting followed by a minute of rest; wrestling was illegal; and any fighter who went down had to get up unaided within 10 seconds, if a fighter was unable to get up, he was declared knocked out. When English heavyweight London rules (bare knuckle champion), James (“Jem”) Mace, embraced gloved fighting this did much to popularize the Queensberry rules. Soon British champions took the Queensbury Rules to the US and toured fighting American opponents. In 1880 amateur boxing officially began and made its Modern Olympic debut at the 1904 Games in St Louis.


In 1870, J G Chambers also developed Catch-as-catch can style wrestling (catch wrestling), this incorporated many other forms of wrestling but was different from Greco-Roman because it allowed grapples. Greco-Roman strictly prohibited grabbing below the waist, while catch wrestling allowed holds above and below the waist, including leg grips. Both catch wrestling and Greco-Roman were popular, and fully competitive, amateur and professional sports. Catch wrestling spread through travelling funfairs with wrestlers developing their own submission holds, or "hooks". By the turn of the century it was taken to the US and became very popular among the immigrant population at festivals and carnivals. 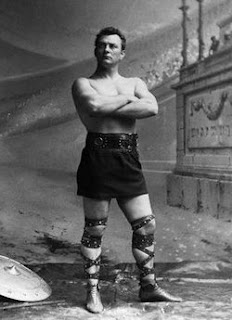 American, William Muldoon became World's Greco-Roman Champion with a win over Thiebaud Bauer ( The Masked Wrestler) in 1880. He travelled around the country and the world, taking on all challengers. Greco-Roman wrestling became an event at the first modern Olympic games, in Athens in 1896. Since 1908, the event has been in every Summer Olympics. Freestyle wrestling became an Olympic event, in 1904. 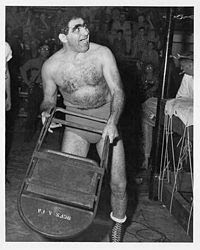 In the late 19th century, a sub-section of catch wrestling changed slowly into the choreographed sport entertainment now known as “professional wrestling”, recognized as much for its theatrical antics and entertainment as wrestling ability. Professional wrestling was a legitimate sport until the 20s when performative, choreographed wrestling (or worked wrestling) became more popular and by the 30s it was as separate entity identified with modern theatrics and acting. 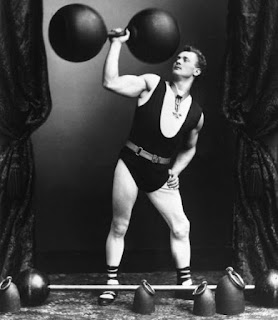 At first when competitors wore shoes these took on a more theatrical look more akin to strongman costume than boots designed for each spots. Boxing and wrestling may appear similar combat sports and take place they take place within a ring and on a canvas surface, but the movements involved are significantly different. Consequently, footwear specific to the needs of the sport were developed. 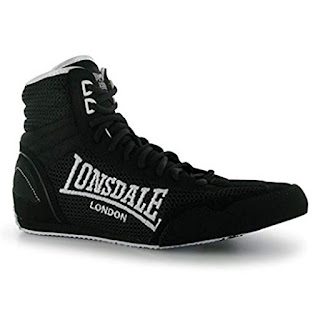 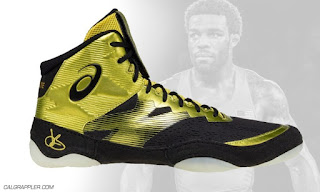 Modern boxing and wrestling shoes appear similar with front laces that run high up the foot and uppers that wrap above the ankle, but each sport requires different aspects from the shoe. Boxers stand straight for most of the time and require their ankles to be supported to avoid the risk of an unexpected fall. As a consequence, boxers’ boots are worn higher (High Top) with added ankle protection. Wrestlers require free movement to adopt a diversity of positions which requires greater ankle flexibility during competition. Footwear for wrestling is move flexible than boxing and is usually worn lower on the leg (Low Top). 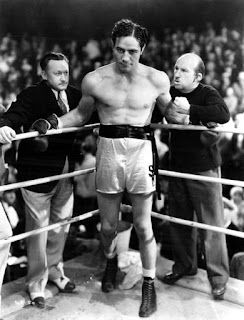 At first, boxing shoes were made of leather and had smooth leather soles. To lessen the chance of slipping, fighters, prior to each bout, stepped into boxes of resin in their corner to coat the soles of their shoes for added traction on the canvas. Footwork is the foundation of boxing and boxers gain a lot of their punching power from the movement and placement of their feet on the ground. Throwing an accurate punch is as much about turning and planting the feet correctly as it is about an out-swinging arm. Good footwork helps boxers transfer power through their legs, hips and upper torso into a strike.


Boxers adopt a standing position with short fast and accurate movements forward and backward along with some side to side movement. Rarely do they need to push off from the balls of their feet and prefer smoother sole patterns with fewer grooves (horizontal lines) for traction. Boots also need to be light enough for them to move around quickly with a full range of motion, but tough enough to protect them from an opponent accidentally standing on their foot. 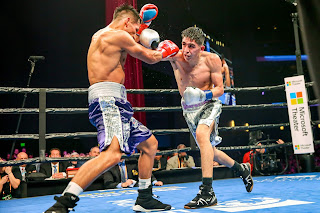 Modern-day boxing shoes are made from a mix between leather, suede, and synthetic polymers materials with mesh fabrics to allow sweat to evaporate quickly. Leather provides comfort and support, while man-made fibres are lightweight and breathable. Soles are textured for added traction on the canvas. The more contact the boots make with the canvas then the greater amount of force can be transferred through the legs and into the punch. There is a direct relation between size of the fighter’s foot and the power of punch in division. Boxing shoes have no arch support, stiffer soles with less tread, allowing the feet to glide with ease on the floor or canvas. High tops are still preferred for competition but Low Top shoes can be worn for training and workouts. The shuffling motion in boxing, requires fighters wear socks. 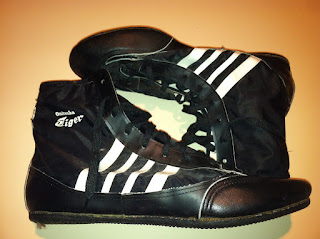 Traditionally wrestling boots were made from leather but modern boots from the 70s onwards were made from lightweight synthetic materials. The intense variety of sharp and fast movements during competition mean wrestlers need well-made boots that can withstand the stresses with comfort and support essential. Wrestling shoes have ankle straps, sometimes even Velcro, to keep you from tipping over and incurring too much frontal damage. The strap is the most vital part of the shoe and secures the foot, preventing slippage. 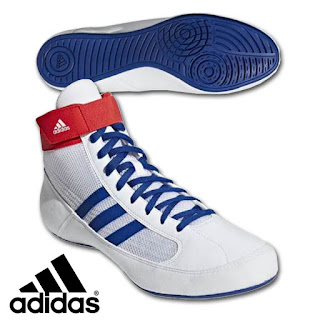 Wrestling shoes typically have rubber soles with rougher patterns underfoot and wrap up the sides of the foot, to provide grip on the mat when the feet take different positions. This allows the wrestler push off in any direction.