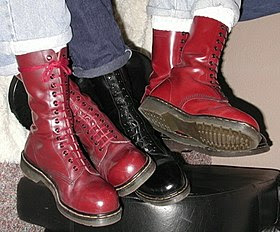 Men have an innate preference for products that not only function well, but also express themselves (Belk (2001). The author believes women use less clothing to highlight their natural erogenous features and choose shoes to show their personality and uniqueness. Men prefer, it appears heavier apparel to create illusionary effects of masculinity and virility, some argue this is because they have fewer erogenous qualities. Experts’ believe men’s footwear forms part of a uniform marking membership in a group. If this is true, then it is no surprise to see within subcultures i.e. those who share the same ideals (good or bad ), wear similar shoes. 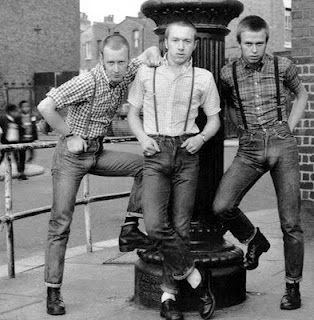 The skinhead movement started in the 1960s among working class youths in England and soon spread to other parts of the UK. An alternative to ‘hippy culture’, skinheads (“Suedeheads “ or "skins") were defined by their close-cropped or shaven heads, Dr. Martens 12 lace boots (bovver boots), button-down shirts, braces, and straight-leg jeans. The 60s skinheads liked Jamaican music (bluebeat ska, and reggae) and mirrored the fashions of Jamaican rude boys. As a subculture they overlapped with Jamaican British and Jamaican immigrant youth. At the time skin heads were apolitical. In the early days of the skinhead subculture, some skinheads chose boot lace colours based on the football team they supported. 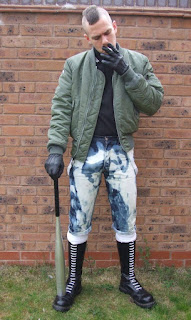 During the early 1980s, political affiliations grew in significance and split the subculture, distancing the far right and far left strands. By the mid 80s, violent racial elements representing extreme racism became active and from the 1990s, disaffected, Neo-Fascist or Neo-Nazi youths in the former nation of East Germany, Spain, Finland, Central and Eastern European countries such as Russia adopted the style. Later, whitepower skinheads (particularly highly political ones) began to use lace colour to indicate beliefs or affiliations. 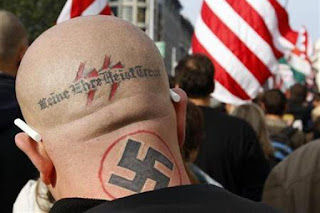 In the United States, certain segments of the hardcore punk scene embraced skinhead styles and developed their own version of the subculture. Later , White nationalist organizations and prison gangs adopted skinheads as they became organised and affiliated nationwide. According to a 2007 report by the Anti-Defamation League, groups such as white power skinheads, neo-Nazis, and the Ku Klux Klan have been growing more active in the United States, with a particular focus on opposition to illegal immigration. 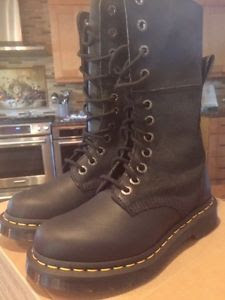 White power skinheads have typically worn higher boots, T-shirts, flight jackets and army trousers or jeans instead of Sta-Prest trousers or suits. Some dress quasi-traditional with Fred Perry or button down shirts and Harrington or denim jackets. They usually crop their hair shorter than the 1960s-style skinheads and many shave their heads completely with a razor. White power skinheads tend to have more tattoos than the skinheads of the 1960s. These tattoos often feature Nazi, racist, or nationalistic imagery. Rune symbols as well as Nordic, Celtic and Germanic artwork are also common themes. 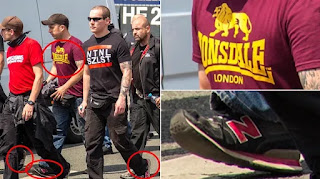 By the New Millenium, traditional bovver boots had gradually replaced by soccer-style athletic shoes, by brands such as Adidas or Gola. In Europe, neo Facist groups wore Lonsdale clothing. The four middle letters of Lonsdale, spell NSDA, and are almost the same as the abbreviation for Adolf Hitler's political party, the Nationalsozialistische Deutsche Arbeiterpartei (NSDAP). 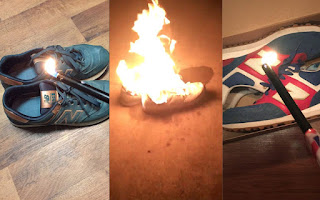 Clothing and footwear companies are unwilling to affiliate with political groups and deny any association whilst often continuing with production lines which are clearly popular with anti-social groups. In 2016, after New Balance gave support to Donald Trump’s presidency and protectionist trade policies, North American Neo-Nazis claimed New Balances as "The Official Shoes of White People," and urged their supporters to be patriotic and buy and wear the label's sneakers. (Fact check: approx. 25% of shoes sold in the U.S. are made in the US). The management quickly tried to distance the company from all association with bigotry, hate and political affiliation by issuing a statement but specifically failed to disassociate itself from Neo-Nazis endorsement in the interests of commerce. Outraged customers responded by taking to social media to share photos and videos of New Balance sneakers in trash cans and toilets; or set aflame. 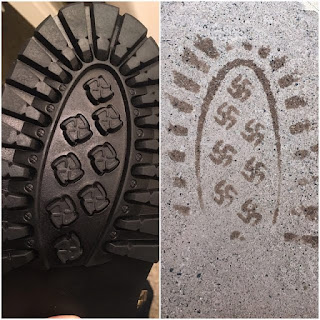 In 2017, when it was discovered, military-style work boots sold by a Southern California shoe company left a tread mark (print) of a swastika on the ground, they were quickly withdrawn. Conal International Trading recalled the imported Polar Fox boots from China and stopped selling them. The company unequivocally apologised for the offensive footwear. The combat boots share a name with a World War II military operation , Polarfuchs , or Artic Fox, during which German and Finnish soldiers captured Salla, Finland, from the Soviet Union. 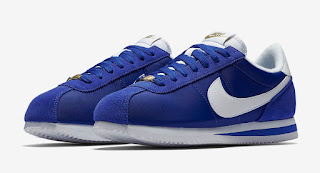 There is a long association between US street gangs and their choice of shoes. Colours too, play an important role in gang culture When street gangs showed preference for certain shoe styles it soon becomes their affiliation identifier. Some leading sport shoe companies deliberately courted the patronage of youth culture and breached good taste by affiliation with drug and gang activities. The Cortez was used by the MS-13 as an “identifier”, worn as homage to the gang’s west coast origins. Originally gang members in the 80s from El Salvador romantically identified their shoes with Hernán Cortés who conquered the Aztecs. After a crackdown on the MS-13 gang hundreds of arrests followed many were identified by their Nike Cortez sneakers. As a result the shoes once favoured by the Mara Salvatrucha gang became passé.

Footnote
According to an English newspaper in 2015, German nationalist settlers have replaced jackboots with wooden clogs and a fondness for the brand Lonsdale clothing. The nationalist settlers are a group of extreme right-wing German fascists focused on building a Fourth Reich. The young neo-Nazi's (Nationalsozialistische Deutsche Arbeiterpartei) live in small villages in isolated parts of the countryside, working as organic farmers, midwives and craftsmen using traditional materials. Far from cities, the nationalist settlers establish themselves into local positions of power as councillors, volunteer firemen, teachers and festival organisers to help spread propoganda. Over the last decade, far right groups have systematically, and en masse, bought up local properties pushing unsympathetic locals out to establish Nazi only communities. Banned songs are sung at bonfire festivals and authorities are concerned children are indoctrinated with the archaic ideologies of anti-semitism and a superior race.