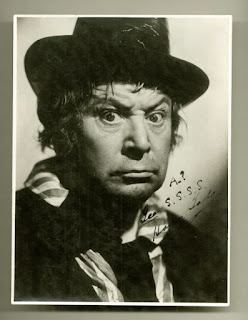 The catchphrase was associated with the British music-hall comedian Harry Tate (1872-1940). He used several catch phrases and some became so popular they slipped into the general lexicon. By far ", "How's your Father" (used as an escape clause when he was unable to answer a question) was the best known. The name “Harry Tate” itself , became rhyming slang for "late," reference to his most well known comedy sketch, Motoring" sketch. Later it could be used for "plate" and “state.”


Tate used, “How is your father?" as an exclamation and a way of changing the subject on stage in order to get out of a difficult situation. It may have been in common use before then, but Tate certainly made it well known among servicemen in the First World War. As if by irony one of his other well known catchphrases was ‘Goodbyee.’


Double entendre and inuendo were common on the Victorian Music Hall and it is possible, 'And how is your father?' was a phrase used by any suiter, keen to ascertain the whereabouts of his beloved’ father before having a discreet ‘slap and tickle,’ beyond parental approval. The phrase however, took on a life of its own meaning anything the speaker did not wish to name. Phrases like 'indulging in a spot of how's-your-father', ‘get your ‘leg over’ and ‘a bit of the other,’ soon became common euphemisms for sexual activity by the end of WW2 and 1950s.