One small step: The evolution of man 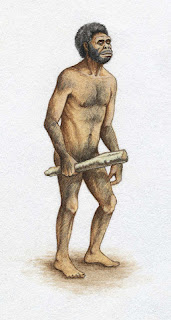 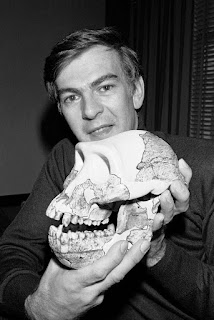 In 1974, during a survey at Hadar, Donald Johanson and his research assistant, of the Cleveland Museum of Natural History observed a hominid forearm jutting from the bank of a gully. Once the excavation was complete they discovered a set of skeletal remains nearby which appeared to be from the same individual. The remains were dated to about 3.2 million years ago and dubbed ‘Lucy,’ because "Lucy in the Sky with Diamonds" was being played repeatedly in the expedition camp. The specimen was identifies in 1978 as the first known member of Australopithecus afarensis , a species thought to be one of the direct ancestors of modern humans.


Lucy was 1.1 m (3 ft 7 in) tall, weighed 29 kg (64 lb), and (after reconstruction) looked somewhat like a chimpanzee. The creature had a small brain like a chimpanzee, but the pelvis and leg bones were almost identical in function to those of modern humans. Experts determined Lucy's species were hominin and stood upright and had walked erect. More finds of A. afarensis throughout the 70s and in 1992 followed with an almost complete skeleton of a related hominid, Ardipithecus found in the same Awash Valley. Dated at 4.4 million years ago, it had evolved much earlier than the afarensis species. 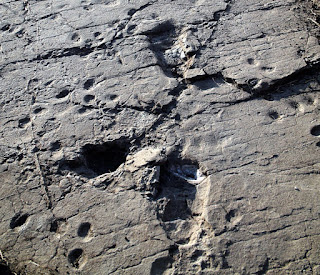 In 1976, Mary Leakey a paleoanthropologist, reported finding ancient hominin footprints at a site in Laetoli, north eastern Tanzania, in the southern margins of the Serengeti Plains in the Ngorongoro Conservation Area. Frozen in volcanic deposits from the Pliocene, (5.333 million to 2.58 million years ago), experts believed these footprints belonged to an extinct Australopithecus afarensis. 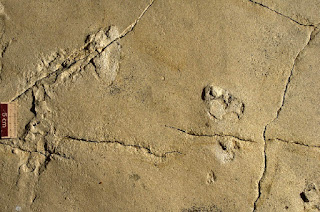 In 2002, Gerard Gierlinski, a paleontologist, on holiday on the Greek island of Crete, found fossil footprints. He paid no more than a passing interest at the time but in 2010 returned to the island and eventually with the help of other exports discovered the fossil footprints were human and imprinted in layers of rock and sediments dated to the Miocene era, 5.6 million years ago (mya). The prints clearly supported bipedals walking on two feet. The feet lay close together, like humans, rather than waddling, as chimpanzees do. The Miocene predated Ardipithecus, and Gerard Gierlinski had discovered the oldest human-like footprints in the world.

The Trachilos footprints were small with the largest no more than 23 centimetres long (women’s size six shoe). Researchers determined the presence of five digits in the imprints, classifying the track maker as pentadactyl, and lacking claws. In the front, the toes were very human-like, with a mobile first ray and the heel narrower, like that of a chimpanzee or gorilla. 3-D printing and laser scanning identified a ball region and morphometric analysis confirmed the footprints had outlines distinct from modern non-hominin primates and resemble those of hominins. 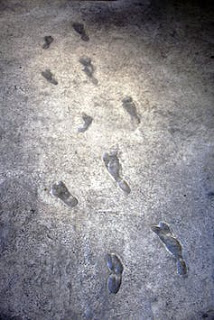 At first announcement of the find met with criticism from the established academic community reluctant to accept the date of the footprints as no pre-human fossils that old had ever been found in Europe. It took Gierliński et al., six and a half years to get their research published. Since the discovery of Lucy in Africa, in the mid-sixties, the origin of human lineage was thought to lie in Africa. It was believed these hominins remained isolated for several million years before dispersing to Europe and Asia. The discovery in Crete, and the possibility of hominin evolution outside of Africa, contrary to current hypotheses suggested a more complex reality such as the possibility of convergent evolution .

A more plausible explanation proffered i.e. during the late Miocene time, the Sahara Desert did not exist and savannah-like environments extended from North Africa up around the eastern Mediterranean. Crete was not yet detached from the Greek mainland and early hominins may have left their footprints on a Mediterranean shore as they ranged across south-east Europe and well as Africa.

Footnote
Shortly after the research was published, four or five of the 29 prints were chiselled out of the rock in Trachilos and stolen. Fortunately, local authorities soon arrested the perpetrator, and the damaged footprints were recovered. Fortunately, the stolen prints had been laser-scanned in 3D and no scientific data was lost. Crete authorities have subsequently buried the footprints under gravel and rocks for their protection.

Labels: One small step: The evolution of man